You Make the Market The Market Doesn't Make You! 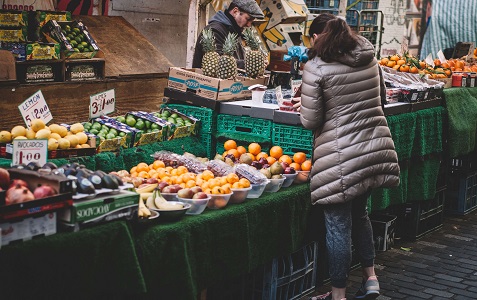 When I managed a large real estate office, I learned a powerful lesson. Sitting at my desk one day, it suddenly hit me.

It was a Revelation.

The revelation was this: I make my market. No matter how dire the news.  No matter how “downward trending” the statistics may be. No matter what anyone else says.  My market is the one I create for myself.

Most of the other agents in my office did just what all agents seem to do.  They sold based on the seasons. When the “busy” season rolled around, they were selling at the fever pitch.  But when the “slow” season started, the agents got slow too.  In fact, some seemed to disappear completely.

However, there were exceptions.  There was one firebrand in particular whom I remember was out there every day.  Rain, snow, and sleet were not a hindrance to her. (Guess what? She was consistently a top agent. Surprise, surprise!)  I watched as she relentlessly pounded the pavement every day.  It didn’t take me long to figure out that’s how to do it.

While everyone else was whining that “the market is too slow right now,” this one agent and I, once I figured it out made some serious money.

I hear it all the time. We all do it. We say things like, “The summer is going to be slow,” “The spring is going to be busy,” and “Why bother putting anything on the market after December 10th?  We might as well wait until January.” All of those beliefs come from other agents, and over time they’ve come to be what we believe is the “norm.” Truly, that kind of statements is like old worn-out records.

The day I had my “revelation,” I stopped believing in any so-called “norm.”  I made my norm.  I made my market.

For example, December became my busiest month. Seriously. Why?  Because I was the only agent out there.  I got all the business because every other agent was hiding at home waiting for the holidays to be over.

Yes, I had to convince my clients that it was in their best interests to bring a listing on the market December 10th.   I explained to them that it was the most opportune time in the entire year because while we were listing, other agents were resting.

Later in my career, I became a designated broker.  That’s when I saw the impact of this phenomenon in an even bigger way.  Some of the agents in my office learned to embrace the same mentality I had and those agents always did well during the “slow” times. They were consistently rewarded for their efforts.  They made their markets.

You can make your market.  You control it.  You define it.  You decide the pace of business you want.   It’s all up to you.

If you’re making contact with people on a regular basis, you can ignore all the whining, the “bad news,” and everybody’s expectations.
Your hard work and effort pay off because you find the business nobody else is looking for.

You make a market when you stay in regular contact. No matter the “trying times.” No matter the nightly news reports of impending doom.  No matter the long days-on-market numbers that everyone sees in the newspaper.  You give clients constant updates on what you’re doing for them and what they need to do.

You make a market when you call your sellers on a regular basis to talk about price in the context of the current market. By being honest and straightforward with them, you earn their trust.  Sellers want to get their home, and usually, they want to sell fast.  By encouraging a price reduction, that’s exactly what you’re doing.  You’re helping them.

I know it can be tough, especially if a seller has clung to a certain price for a long time, but you’re working for the sellers. You’re their valued advisor.  Not telling them the truth is not an option.

You make a market when you educate people about the marketplace. All most people hear about real estate comes from the nightly network news, or from “water cooler” talk with colleagues. All the nightly network news ever reports is the disaster.  Sitting in an air-conditioned studio in New York City, these people are not in the trenches every day. You are!  Share your knowledge with people. Tell them what’s going on in their neighborhoods.  Show them the real statistics and activity.  Educate them, and they will reward you with loyalty, and future business.

You make a market when you follow up with people from open houses. Always follow up.  Get to know the people who attended your open houses. Dig deep.  Ask them solid questions.  Become their trusted confidant in finding a home. Don’t be just another run-of-the-mill real estate agent.

You make a market when you offer something different from what any other agent has to offer. You provide value. You are an expert.
Show the world that you are different. Your skills are not average. You can help people get what they want, and you can do it faster and better than anyone else.