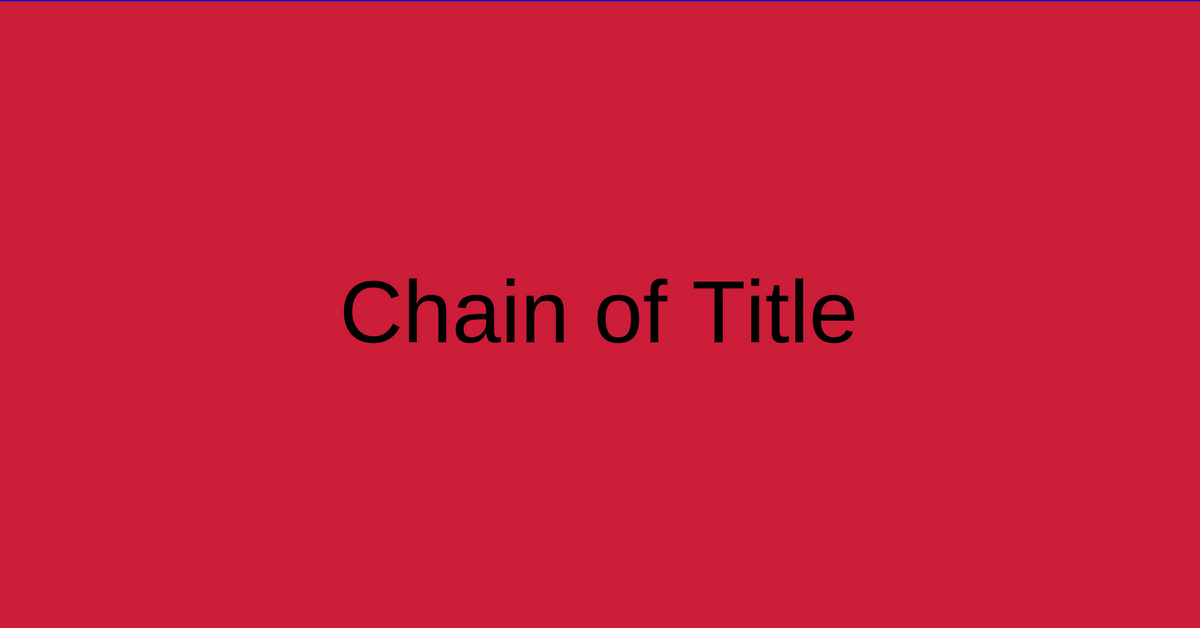 The recorded history of matters that affect the title to a specific parcel of real property, such as ownership, encumbrances, and liens, usually beginning with the original recorded source of the title. The chain of title shows the successive changes of ownership, each one linked to the next so that a “chain” is formed.

Ownership of a particular property frequently passes through many hands subsequent to the original grant. If any link is broken in a property’s chain of title, then the current “owner” does not have valid title to the property. For example, if a forged deed were somewhere in the chain, then no subsequent grantee would have acquired legal title to the property.

An abstracter searches and notes the chain of title (also called running the chain of title) in an examination of the title at the office of the county recorder or clerk, tracing the title from the original grant up to the present ownership. In the United States, chains of title in colonial states frequently date back to a grant from the king of England. In those states admitted to the Union after the formation of the United States, the deeds of conveyance in chains of title generally stem from the patent issued by the U. S. government. In a few states, such as Louisiana and Texas, chains of title generally date back to a point before acquisition of the land by the federal government.

To be within the unbroken chain of title, the instrument must be discoverable or traceable through linking conveyances from the present owner through successive owners to a common grantor. If not, a “gap” exists in the chain, creating a “cloud” on the title. In these cases, it is usually necessary to establish ownership by a court action called a suit to quiet title.

All documents recorded in the chain of title are said to give constructive notice of the document and its contents. However, if a document is not recorded in the chain of title, so that even a diligent search using the grantor-grantee index will not reveal its presence, then there is no constructive notice given of the existence of the unrecorded document. A deed not properly recorded is said to be a wild deed and is not valid against a subsequent recorded deed to a good-faith purchaser.

In practice, abstracters rarely search back more than 60 years. Some states have adopted a marketable title act that extinguishes certain interests and cures certain title defects that arose before the “root of title” was recorded. The root of title is the most recent conveyance (deed, court decree) that furnishes a basis for title marketability and has been of record for 40 years or more.

Other chain of title problems arise when a person acquires title using one name and then conveys the property under another name. In such cases, the grantor should indicate the name by which she acquired title; for example, “Sally Hines, who acquired title as Sally Fromm.” Because of the importance of the chain of title, it is necessary that the parties’ names be consistent and spelled out properly in all documents.