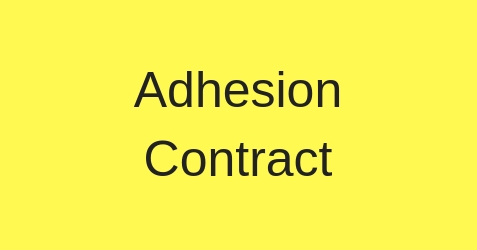 A contract that is one-sided, favoring the party who drafted the document. In fact, an adhesion contract can be so one-sided that doubt arises as to its being a voluntary and uncoerced agreement because it implies a serious inequality of bargaining power. Courts will not enforce provisions in adhesion contracts that are unfair and oppressive to the party who did not prepare the contract. Also called a take-it-or-leave-it contract.

Contracts with a lot of fine print, such as franchise agreements, mortgages, and leases, are sometimes challenged as adhesion contracts on the basis that the non-drafting party did not have a chance to bargain on the various provisions of the agreement.

An insurance contract (property, title, life) also is sometimes challenged as being an adhesion contract. Courts have held that any ambiguity is to be construed in favor of the insured, and any exclusion from coverage must be clearly and conspicuously stated. Courts will also apply the doctrine of unconscionability.